These little beauties are German cockroaches (blattela germanica) they love to live in nice warm areas of buildings, around fridge motors, beind ovens, in electrical items etc. They are 1cm to 2cm long and are light brown to almost black in colour. German cockroaches are omnivorous scavengers. They are attracted particularly to meats, starches, sugars and fatty foods. Where there is a shortage of foodstuffs, they may eat household items such as soap, glue and toothpaste. In famine conditions they turn cannibalistic, chewing at each other's wings and legs.

My first real dealings with German cockroaches was in a hotel in North London that housed overseas students. I had been called out to inspect a room where a couple of roaches had been seen the night before. The manger insisted that there had been little sign of roaches in the room so off I went, the room was a one bed it had a wardrobe, a sink, a fridge and a little cabenet with a tv on top. Being freshly trained I looked around the room and thought "fridge" so rather foolishly as it turned out I just pulled the fridge out and......woosh there were cockroaches everywhere not one or two but hundreds, I had left my sprayer in the hall. Cockroaches were running everywhere and most worrying of all they were running up and down my overalls....panic I ran into the hall way taking my overalls off as fast as I could, jumping up and down trying to get them off me. Eventually I had killed most of the cockroaches that were on me, I put my overalls back on, put on my mask, picked up my sprayer and went back into the room. All the roaches had gone back behind the fridge so I carfully inspected the rest of the room, there were cockroaches everywhere, in the TV, around the sink, in the bed. The Tv was on a little cabenet where the student kept some food, I could see cockroaches running in and out of the packets of pasta and sugar.

At this point I went downstairs to get the manager to show him how bad the problem was, I also insisted be brought up a bin bag so we could remove the contaminated food items. By the time we got back to the room all the cockroaches were back hiding and the manager could not see what the problem was, I picked up a bag of pasta and put it in his hands, "There are no cockroaches here" he started to say when the packet almost walked off his hannds as there were so many cockroaches in the packet. I have never seen a man throw so much stuff into a bin bag as quickly as he did that day, I treated the room and laid insect detectors to help moniter the problem. I then went and looked at the next door rooms and those above an below this room, there were cockroaches everywhere, every room I went into had cockroaches and there was over 30 bedrooms in this hotel. Did we get rid of the infestation you are asking, no we did not, the property was on for the minimum they could get away with price wise and to remove the problem would of taken lots of man hours at the time, so they cancelled the contract and I never went back. I often wonder if that hotel which I still pass when I am driving towards Swiss Cottage still has a cockraoch problem? 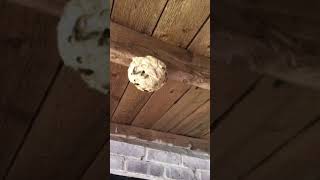 A good year for the wasp